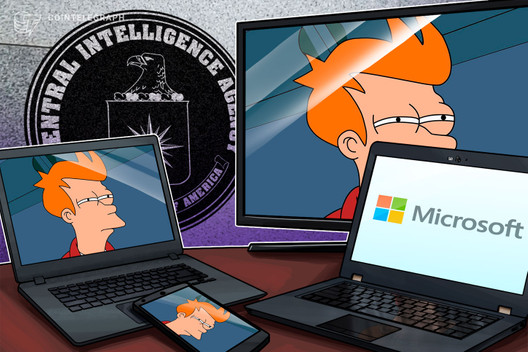 Cryptocurrencies are not immune to the feverish climate in 2020 — a year in which the line between mainstream politics and an online morass of conspiratorial theories is becoming ever more blurred.

Former CIA counterintelligence and staff investigator Kevin Shipp, who has close to 150,000 followers on Twitter, has now dragged a recent Microsoft cryptocurrency patent into the quagmire.

On Sept. 10, Shipp linked Microsoft’s recent cryptocurrency patent, which would enable users to mine crypto using their body activity data, to a short-lived Microsoft ad that had featured the Serbian performance artist Marina Abramovic.

The ad, which promoted a new mixed reality headset from Microsoft called HoloLens 2, was notably pulled after far-right internet users targeted the video in protest against Abramovic’s alleged Satanism.

In recent months, conspiratorial far-right politics is no longer easy to dismiss as a fringe phenomenon; witness the rise of Qanon, a web of proliferating theories that casts Donald Trump as a valiant warrior against a Satanist, deep state cabal sunk in paedophilia and child sacrifice.

Nor is Shipp the first to fixate on the seemingly obscure case of “Microsoft patent WO2020060606.” Earlier this year, the renowned Oscar-winning film director Nikita Mikhalov told Russian state-owned media outlet RT that the cryptocurrency patent was testament to Bill Gates’ nefarious plans to use vaccination as a ruse to implant humanity with microchips.

Zeroing in on the patent’s name, Mikailov remarked:

“The 060606 part is somewhat alarming. You probably understand this, right? Is this a coincidence or an intentional selection of such a symbol, which in the Apocalypse of John is called the ‘number of the beast’ – the 666.”

For a sober look at Microsoft’s patent beyond the conspiratorial fog, Cointelegraph published an article which outlined the details of the technology and proposal in March of this year.