Bitcoin, gold, and the S&P 500 all sharply dropped today, causing traders to fear BTC is on the verge of a trend reversal.

The price of Bitcoin (BTC), the S&P 500 index, and gold all fell simultaneously on Sept. 3. The sentiment around the markets remains cautiously negative after the drop.

Two factors likely triggered the abrupt decline of Bitcoin by over 8% on the day. First, miners sold off unusually large amounts of BTC in a short period. Second, the U.S. dollar index has started to recover from a key multi-year support area. 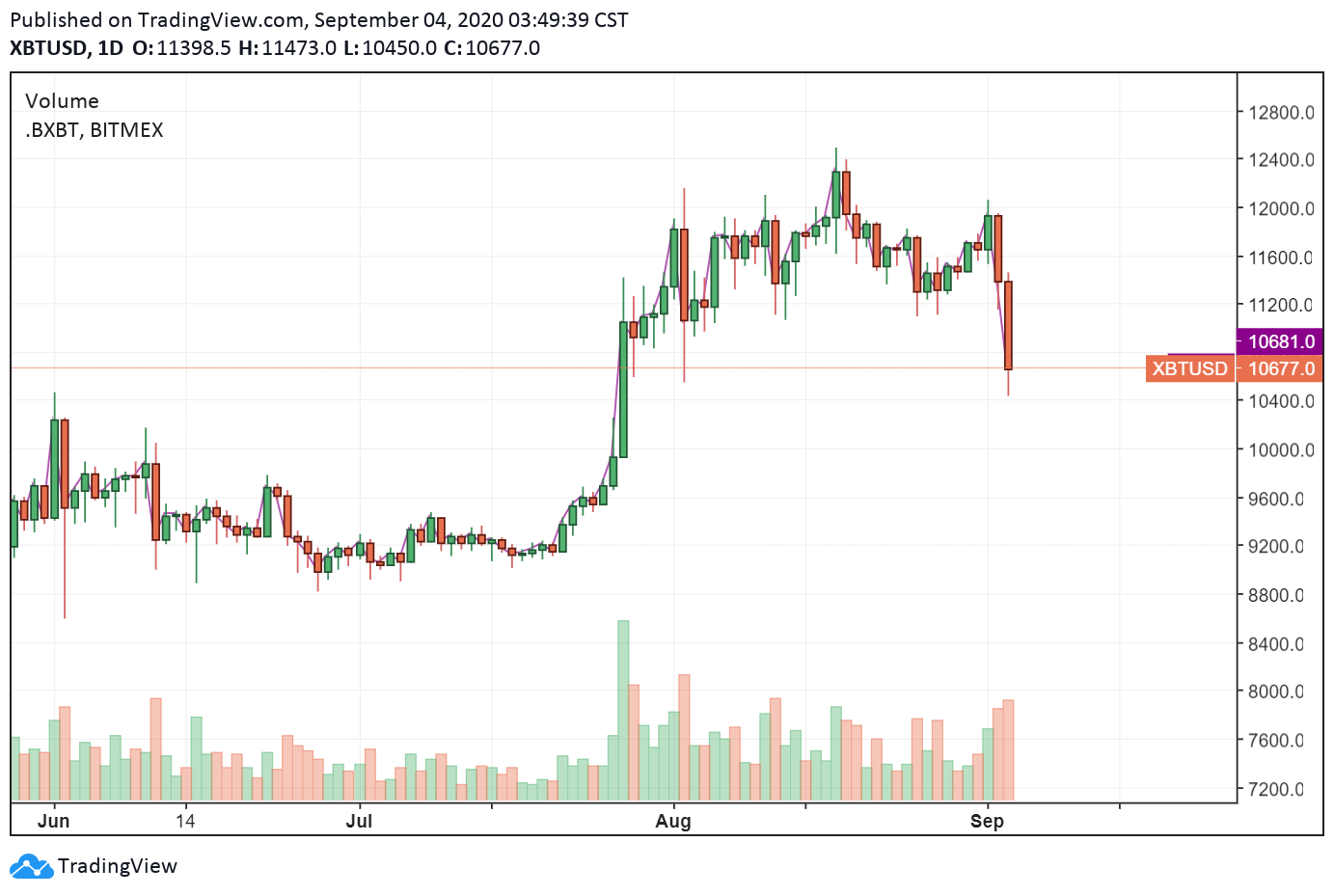 Analysts also attribute the fall of gold to the rising U.S. dollar. The European Central Bank’s warning against the surging euro caused investors to become cautious about the euro. The change in investor confidence further fueled the dollar, contributing to gold’s slump.

The decline of the S&P 500 could have been coincidental, as the drop comes after a strong sell off from big tech companies.

What’s next for Bitcoin price?

The sentiment around Bitcoin after the big fall remains mixed. Some investors say that BTC will likely stabilize above $10,500 and see a bullish continuation.

Others hinted at the possibility of a medium-term top, considering the intensity of the pullback at a key area. A pseudonymous trader known as “DonAlt” said:

“There is a real possibility we’re putting in a mid-term top here. Reclaim mid $11,500 until week-end and I’ll call that idea void but until then I think this structure would make a splendid looking top.”

Technically, the drop of Bitcoin from $11,462 to $10,460 within a single 24-hour span raises the chances of a deeper pullback. This is because BTC retraced 31 days of gain with a single daily candle.

“Held as a support throughout August, the $11,300 level has now been broken, and bitcoin may still have a long way to fall. We can now expect a retest of $10,000 as a new bottom, which might also coincide with the 200 Daily EMA (Exponential Moving Average). From a technical point of view, that could bolster price action and prevent the price from falling further.”

The recent months have been the longest period Bitcoin has stayed above $10,000 since 2017. Another variable that could prevent a further downtrend is buyers from the sidelines entering the market in the $10,000 area.

There is one silver lining

According to Peters, one silver lining is that the recent pullback could tempt buyers in the near term. There is a substantial amount of capital on the sidelines, especially in the stablecoin market.

“There are a number of potential causes for the sell-off – chief amongst which is a dump from miners. If there is a silver lining, it is this – that a drop back down to $10,000 could very well tempt some bulls who have been sitting on the sidelines to at last invest in bitcoin.”